From Ventimiglia to Pigna 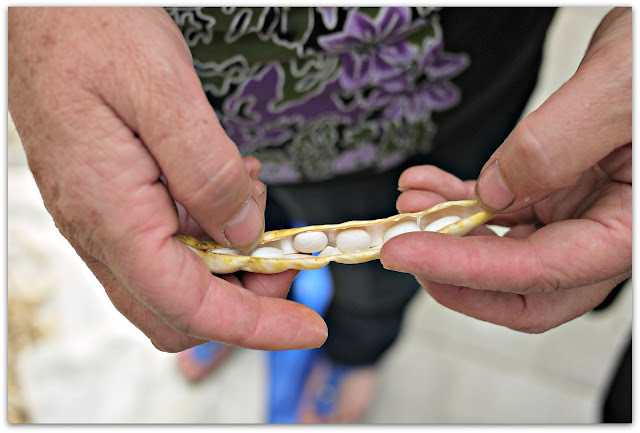 When dear friend Meghan arrived last week for a three night pyjama party, she shared with me that she'd been communicating off and on lately with an Italian man named Enrico.  I grew alarmed.  What about her boyfriend?  Who is this Enrico fellow?

As it turned out, I had nothing to worry about. Enrico and his family grow Pigna beans, one of only 16 certified Slow Food growers in and around the small, pretty, hillside Italian village of Pigna, population 900 and shrinking.

Meghan had been in contact with Enrico to arrange a visit so we could zoom out to his shop in Pigna and fill our car with some of his family's creamy, dreamy, white Pigna beans before they were sold out for the season.  Because of their popularity and scarcity, selling out is a definite risk.

But our little bean buying adventure became more memorable than we'd expected.  We were convinced we had fallen into a culinary fairy tale...

To get to Pigna, we needed to drive through the sea-side town of Ventimiglia, just across the border with France.  Once there, naturally we couldn't just drive by the magnificent food market so we wrangled our granny carts out of the car and dove inside to see what was on offer that day.

An hour or so later, our carts laden with goodies, we were all in need of refreshments.

Just a short walk from the market is a favourite place of mine, the Bookcaffé where I often stop for a quick orzo or two after battling the crowds at the market.  Popping in there has also become an excuse to visit with the fabulous Cindy, a young Italian-American woman whose lively and engaging conversations have caused me to miss many a train back to Monaco.

While we were lounging around sipping orzo and eating focaccia, Meghan called Enrico to let him know that we were on our way.  Ever the gracious hostess, and Cindy's Italian being much better than ours, she offered to speak with Enrico on our behalf. She grabbed the phone to get directions to his shop.

Who would have guessed that years ago, Cindy had been married in Pigna and Signora Rina, Enrico's mother was a dear friend of hers. Quite a coincidence. Their conversation went on for a bit and by the time we'd downed our second or third cups of orzo, Cindy had written out detailed directions to Enrico's Pigna bean shop.  Today, the shop was being manned by Signora Rina and her husband, Nino.

After many kisses, hugs and thank yous for Cindy's help, off we went.

I'm not sure what Cindy said to Enrico, but when we finally arrived at the family's shop, Rina and her husband Nino greeted us like we were long lost friends. 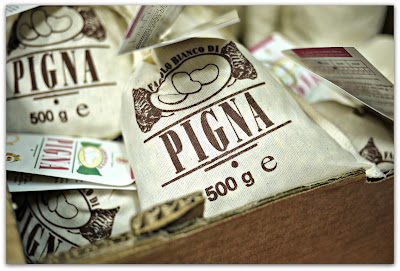 After a few formalities, Rina and Nino led us into a small, dimly lit room.  There was a musty smell in the air that reminded me of an old wine cellar we visited years ago in St Emilion. It didn't strike me as the sort of place where expensive dried beans were being measured and destined for exclusive food shops around the world.

At the back of the room was a wooden counter where large sacks of just dried beans sat on the floor.  In one of the sacks was a small enamelled cup used to measure them and then fill the familiar, official white Pigna Bean canvas bags.  Rina pointed out that the bags, which were supplied by the growers' consortium, cost €1 each and were required for selling the beans.  I had the impression that she thought the bags were very expensive. 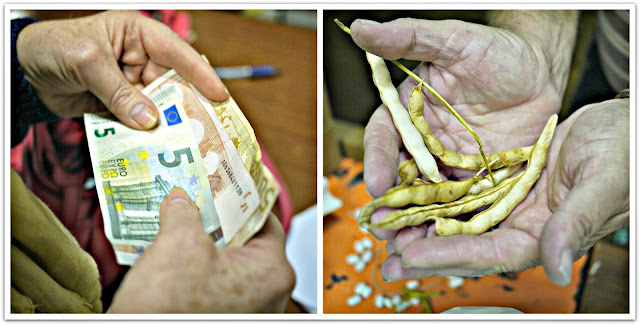 Once we decided on the number of bags we wanted to buy, money was exchanged, the bags were tucked into our hot little hands and then Rina and Nino wrote out their family recipe for a sweet cake made with cooked Pigna beans. This is something I must try.

I confess I tuned out a bit while Meghan and our hosts were conversing in Italian, but it gave me a chance to take in the room a little more closely.

Off to the side of the room there was a tall wooden case that I suspected may have been an antique gramophone. I have a thing for the crackly sound of 78's and antique gramophones in general so I can spot them a mile away. In fact, I own two of them and hundreds of 78s.

I asked to take a closer look so Nino kindly opened the lid. I turned the crank, Nino lowered the tone arm and the room filled with the scratchy, sound of Frank Sinatra singing Among my Souvenirs. 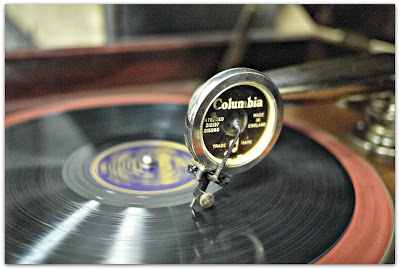 While the wistful song played, our hearts soared and goosebumps rose on my arms.  The sound of that song, being in the little village, the smell of the room and the open arms and generous way that we were being treated was magical.

Beside the Gramophone was another musical treasure, an antique player piano, pushed up against the wall. We'd showed such appreciation for the Gramophone that Nino and Rina wanted to give us a closer look at this too. 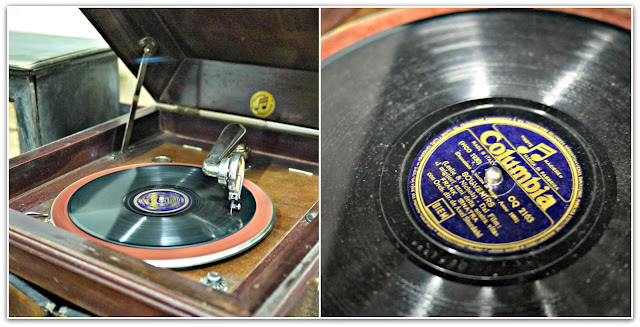 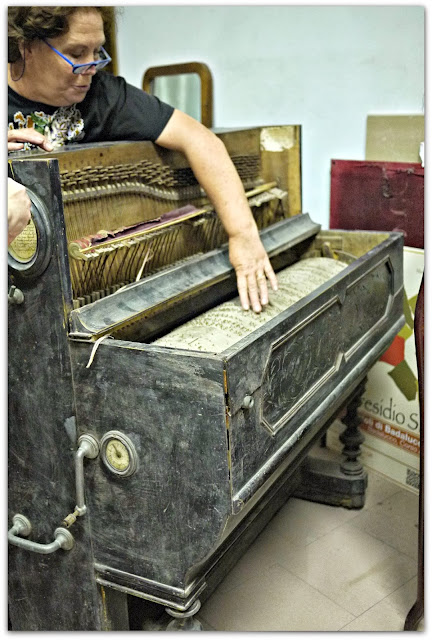 We all gathered around it.  It had a concrete hurdy gurdy roll and was extraordinary heavy. We all grabbed a corner and pulled it out from the wall. The thing was built to last and a beast to move.

Sadly, it no longer worked but it had had a lovely life.  Ages ago it belonged to the Pigna dance hall and there were plans afoot to raise funds to send it north for restoration.

They pointed out the side of the piano where there was a play list of 10 songs available on the roll.  One of these songs was "da Ventimiglia a Pigna."  It was a song dedicated to the journey we'd just taken to get there.

That journey in our little car had taken us just under an hour but I imagine that during the era that Pigna's inhabitants were dancing to the music provided by the piano, the same journey would have been a monumental undertaking. 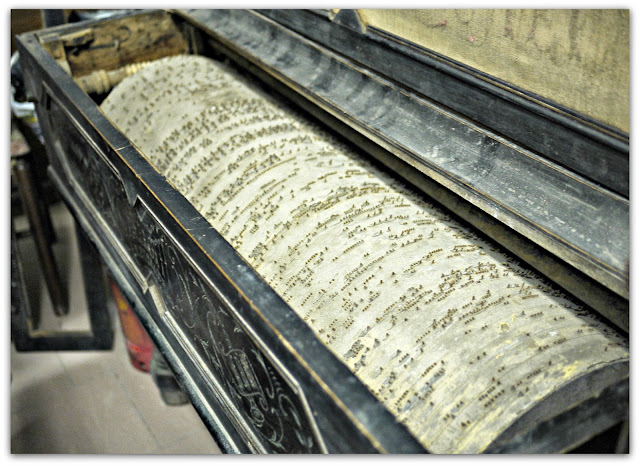 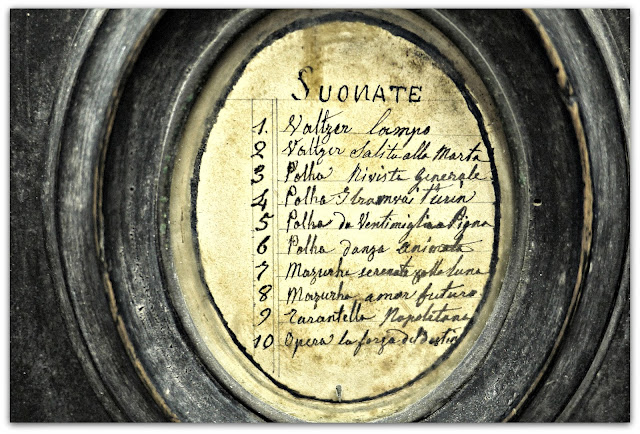 When we finally left the shop and said our goodbyes in the fresh air, we noticed that across the street, casually spread over tarps on the terrace, were more of Enrico's Pigna beans drying in the mountain air.  The secret to drying the beans properly said Rina, was to leave them in their pods until the beans were completely dried.  No doubt about it, those beans had a spectacular view to dry by.

By the time we left we were new friends.  Nino and Rina invited us to take part in the family's olive harvest and Rina ran inside and reappeared moments later, hands held out holding two small bottles of their family's olive oil.
They were so lovely I had to do something to reciprocate.  I reached into my purse and handed Rina two plump McIntosh apples that I had grown myself, one of a coveted 12 or so that I had brought back from Canada about a week before.  I'd popped them into my bag to share with Meghan and Hubby as a surprise snack on our drive back home.

Thinking about it, those apples were my own Slow Food operation.  I'd grown them on a tree at our home in Canada, 10 steps from our back door.  Over the years, we'd nursed that tree from a twig to a robust producer of fine apples.

I could think of no better people to share them with than Rina and Nino.

Pigna beans are grown only in and around the pretty hillside village of Pigna, a lovely 40 minute drive inland and a gently climb 280m skywards from the coastal town of Ventimiglia.

Around 4,500 kg of Pigna Beans are produced annually between the 16 registered growers, most of whom sell their beans to retailers around the world in characteristic white cloth bags.

They are available locally from October to December.

Small, bright white and with an incredibly silky texture, according to Rina and Nino, the beans get their unique flavour from the water in the nearby sulphur springs that growers use to nourish the plants during the growing season.  Rina pointed out that the beans grown in nearby towns don't taste the same as Pigna beans.

Only a small number of Pigna beans are sold fresh in their pods but they can be found occasionally, in some nearby Italian markets like Ventimiglia and Dolceacqua.  Most of them are sold dry and exported.

Personally, I prefer them finished simply with a drizzle of olive oil, some chopped herbs and salt, but near Pigna you'll find them on menus cooked into hearty goat or wild boar stew. 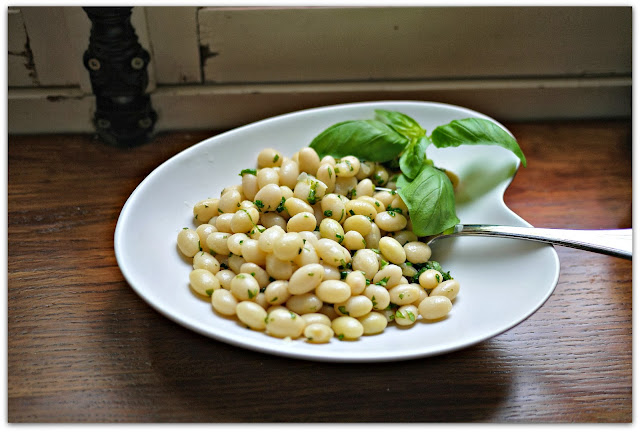