A Day of LAFFing, Jam, and Chocolate

I'd been following tweets and re-tweets from LAFF (Locavore Artisan Food Fair) and LAFF devotees for a couple of months since I left Canada to spend the fall in our seaside shack in the south of France so when I landed in Ottawa for the holidays this week and started seeing tweets about their event this Saturday, I put everything aside and shot over to have a look. 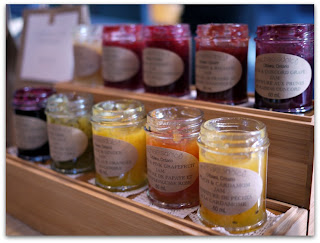 The LAFF event was at Memorial Hall on Dufferin Road in Rockliffe and when I snagged a Kojak parking spot near the entrance, which always bodes well,  and it just got better and better from there.
Mark and Kendra of The Flatbread Pizza Company were out front firing up their wood fired pizza oven and while snow swirled around us we got caught up and then when the wind picked up I dove inside.
Greeting visitors was the charming Nicola Maule, LAFF event organizer who brought me up to speed on the LAFF concept among other things. I'm lucky to have caught her when I did because the crowd was thick and relentless. 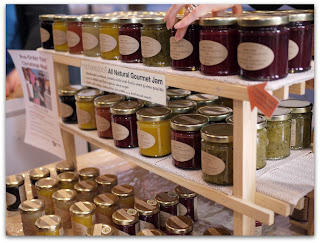 I'd been intrigued by the buzz surrounding confiseur Michael Sunderland of michaelsdolce and his seasonal preserves.  I'm a huge fan of  preserves of all sorts, having made many myself, so I propelled my way through the crowd to taste what he was up to.
The first thing I noticed about Michael's preserves were the vibrant colours.  Then I noticed the soft consistency.  Then I sampled them.  Magic.  Their soft consistency intensified the flavour of the fruit and revealed his skilful layering of flavours that would have been lost had he made them firmer.
Michael's preserves remind me of the elegant post-dinner cheese cart at Alain Ducasse's three Michelin-starred restaurant, Le Loius XV in Monaco where you are always offered preserves made by French confiseur  Christine Ferber to accompany their fine French cheese. 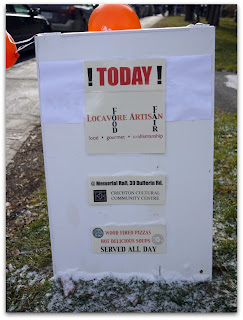 After sampling Michael's jams I thought about pairings.  His Orange and Ginger Jam would be sublime with Italian sheep's milk ricotta on thin slices of toasted Baguette Classique from Art-Is-In Bakery.   His Blueberry and Lavender Jam I'm trying with a fresh goat cheese that I bought from Clarmell Farms who were at the back of the hall.  His Strawberry and Balsamic jam I'm just going to eat straight from the spoon.
I'm grateful that I was lucky enough to meet Michael, considering the crowds, congratulate him on his superb jams and grab a few jars before he was completely sold out.
Michael was not the only skilled artisan I discovered today.  I started the day with a chance meeting with Jennifer Winter of KōKō Chocolates, a Chocolatier  who wasn't at the LAFF event at all. She was at the Craftalicious show at St Matthews Church in the Glebe.
Just by chance I spotted a sign for the show en route to my car, took a detour and I'm glad I did.  Her beautifully made chocolates made her stand out from the crowd and her mastery of chocolate making was obvious the minute I ate one. 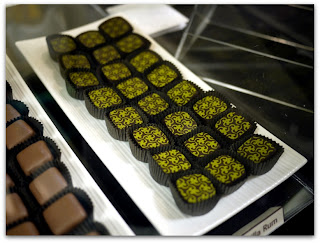 Seeing so many food artisans today surrounded by so many devotees was encouraging and definitive proof that the food scene in Ottawa is roaring along in a way that I never would have predicted 10 years ago.
I have just a few weeks left to my holiday visit.  Who knows what other culinary treats are in store?

Email ThisBlogThis!Share to TwitterShare to FacebookShare to Pinterest
Labels: Finds, Jams and Jelly

Great post, Jennifer! I love Michael and his jam, so I'm happy you finally got to try it. Also, interesting pairings - I'll have to try some of those myself sometime. My favourite of his jams is the vanilla pear. My roommate bought me a HUGE jar for Christmas and I think I may take a page out of your book and eat it with a spoon :). It was lovely to see you again and I hope you enjoyed the rest of your morning!