Crown Someone. Serve the Cake of Kings.

Today is Epiphany in France so don't put away those holiday fat pants just yet!

There is one more delicious cake to indulge in during the coming week, the Galette des Rois or Kings' Cake.  Larousse Gastronomy calls it "Twelfth Night Cake" but most people call it Epiphany Cake since it's  meant to celebrate the Christian observance of Epiphany.

So why all the fuss?  Well, baked into each cake is a fève or trinket and along with each cake comes a crown. You've got to love a cake that comes with its own accessories! 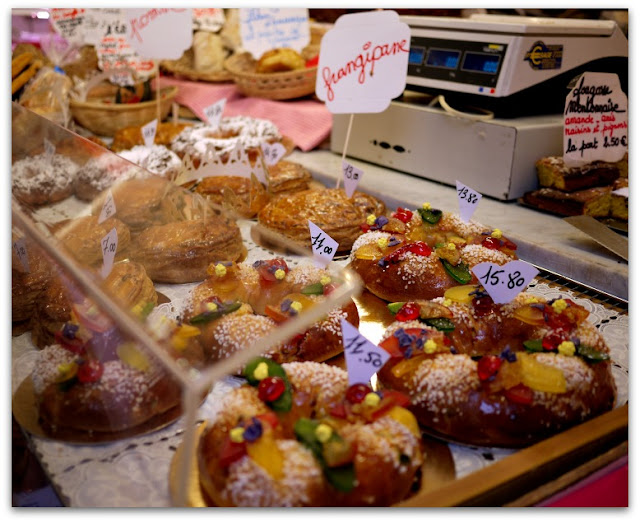 With the Epiphany cake, the fun really starts when the cake is cut and served:  the one lucky person who gets the portion with the fève inside is crowned king.  Aside from getting to wear the crown, being king comes with the royal responsibility of buying the next Epiphany cake.  Precisely when this next cake should appear on the scene varies depending on whom you ask.  As I recall, the last time we served an Epiphany cake in our home, the second cake never appeared, the king kept the fève, posed for photos and gave a long-winded speech.

Traditionally, Epiphany cake is made with layers of pâte feuilleté or puff pastry filled with frangipane, a rich almond cream, but some regions of France have their own style.

Here in the south, you'll find a special Provençal version  made by topping a golden ring of brioche with candied fruit.  Usually there's candied fruit inside too.

One of my favourite bakeries, Le Baiser de Mitron in Menton makes four versions of the Epiphany cake including a special, praline coated ring of brioche.  As an unusual bonus, they put 2 fèves in each of their cakes, perhaps so the cost of buying the next cake can be shared between the two kings.  Unfortunately, they provide only one crown. 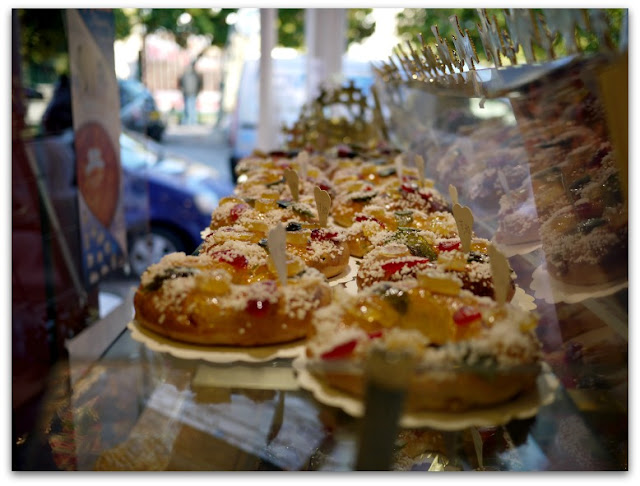 A French friend of mine enjoyed the Galette Franche-Comté as her customary Epiphany cake, popular in Besançon near the French/Swiss border.

Instead of puff pastry the Galette de Franche-Comté is made from pâte à choux, or cream puff dough, collapsed into a pancake that's quite thin so sometimes you can see a bump where the fève is.  Her family had a lovely tradition when it came time to serve the Galette. The youngest child in the household would sit under the table and as her mom apportioned the cake, the sequestered child, unable to see the slices and perhaps a bump where the fève was, got to chose to whom each slice was served.  How's that for a sweet childhood lesson in égalité !

In her great-grandmother's time, the fève in her Epiphany cake was a modest little dried bean and I'll bet she never would have predicted that the fève would evolve the way it has and become a collector's item.  For example, the Paris pâtisserie, Lenôtre, offers a chic boxed set of fèves depicting Aston Martin in place of the humble bean.

The venerable Parisian pastry supply shop, Mora, (a personal favourite of mine) has a great selection of  fèves and crowns that you can order by mail. Keeping apace with modern times they stock ceramic race cars, cupcakes, coffee makers, spices, bees, childhood songs, hand bags, and dairy products.  Something for everyone.

Another local pastry shop  I popped into  today is baking a  polar bear fève into each of its cakes this year.  Why a polar bear?  Why not?

Supermarket Intermarché has cakes stacked like cord wood and an Epiphany cake promotion from January 3rd to the 10th.  For every €10 you spend you get a scratch card for a chance to win a free cake.  I lost.

If vintage is more your style you can always find fèves in antique shops and usually there's a box or two to poke through at the weekly brocante or flea market. 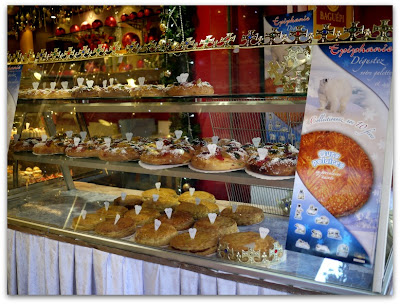 For the true enthusiast, this January 8th in Paris you can attend the 22nd annual Fèves des Rois World Collectors Expo.  Imagine what miniature fun that would be surrounded by millions of fèves.

If you have the time, why not try your hand at making your own Epiphany cake? French company Vahiné has a handy little Epiphany cake kit available from most supermarkets.  Each kit includes the necessary ingredients for a frangipan filling with your choice of either chocolate or praline, a crown, and a little fève of a Japanese girl in a kimono. You just need to add a few basic ingredients of your own, a bit of puff pastry, and some imagination. 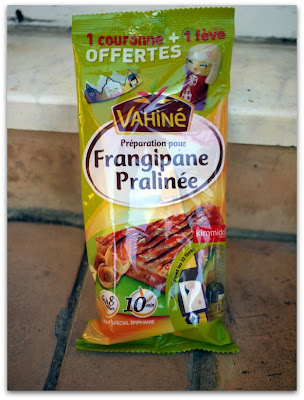 Just for fun, why not put a little fève or trinket into your next dinner party dessert? It can be something fun or something expensive...

Just remember to warn your guests before they dig in! 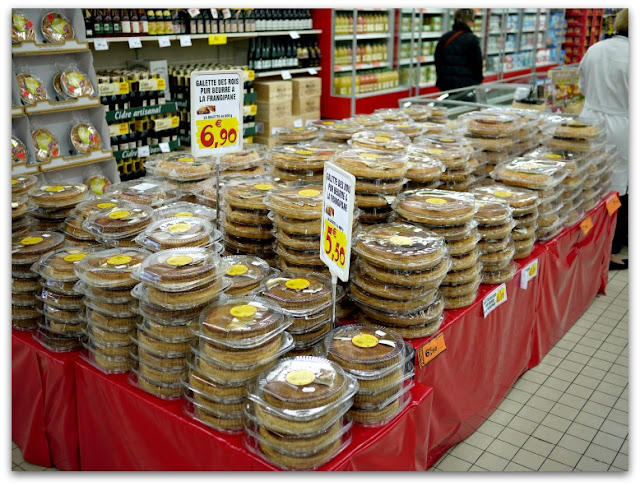 Shows what I know- I thought that the only sort of feve that goes into king cake is shaped like a baby! This is so much more fun... It's like the prize in a cereal box, where you never know quite what you'll get.