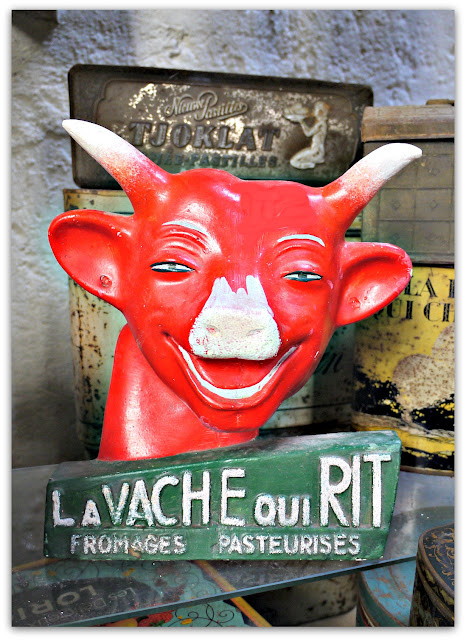 As a vegetarian, I have to admit that all the outrage over horse meat being found where only beef should be leaves me a bit baffled as to what the fuss is all about.

In Italy and France, horse meat is a speciality item and the shops who sell it in France are called Boucheries Chevalines. In a weird, ironic twist, the UK's Guardian newspaper reports that they've been doing a booming business recently since the horse meat scandal broke.

I agree that if you're told you're getting beef and you get horse meat instead, you're the victim of deception and fraud but it seems to me that both horses and cows would be equally fine to eat.

I've been a vegetarian for 36 years so the idea of eating animals seems a bit odd to me in the first place, especially when there are so many other good things to eat.  One thing's for sure, If I were to eat meat these days, I'd want to be sure of where it came from.  I think I'd either hunt it, raise it myself, or drive out to a farm and point out to the farmer which animal I'd like to buy.

I find the large scale killing of animals in commercial slaughterhouses undeniably disturbing as I think even most meat eaters would, but I'm quite OK with the killing of animals for food when it's done on a small scale and in a humane and traditional way.

I have two stories to tell you about that... 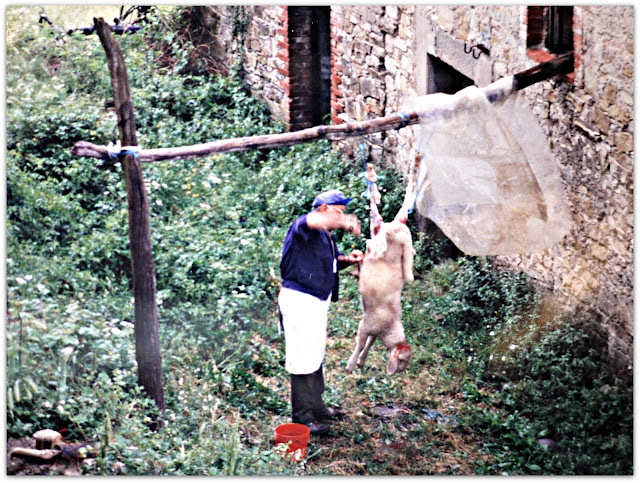 Years ago, Hubby and I rented a beautiful villa in Tuscany in a tiny town called Cotto.  The population swelled to 11 when we arrived but the number of ginger coloured cats remained at 5 for the duration of our stay. 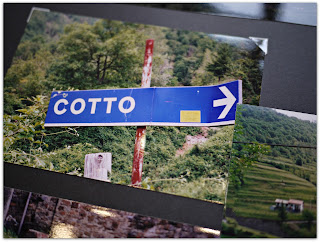 It was Easter weekend and over the Easter holiday, Italians traditionally eat lamb.

Early one morning, I think it was Saturday, we heard a big commotion outside our dining room window.  Curious about what all the fuss was about, we pushed opened the shutters to see that a small crowd had  gathered below along with a few of Cotto's village cats.

It seems that our side yard was the village's abattoir.  Instead of recoiling, I watched for a while as the butcher skilfully and quickly gutted and skinned the lamb while it was dangling from a sturdy pole made from a branch.

After some time had passed, the small crowd dispersed along with the cats, but I continued to watch the butcher at work with an odd mixture of distaste and fascination.  I imagined that every Easter, the same scene has been taking place on the same spot for generations.  The serene setting, the presence of the villagers and the gentle but skilful way the butcher was dealing with the lamb all seemed quite natural to me.  Perhaps more importantly, it seemed to be done with respect.  I doubt much of that lamb was wasted. 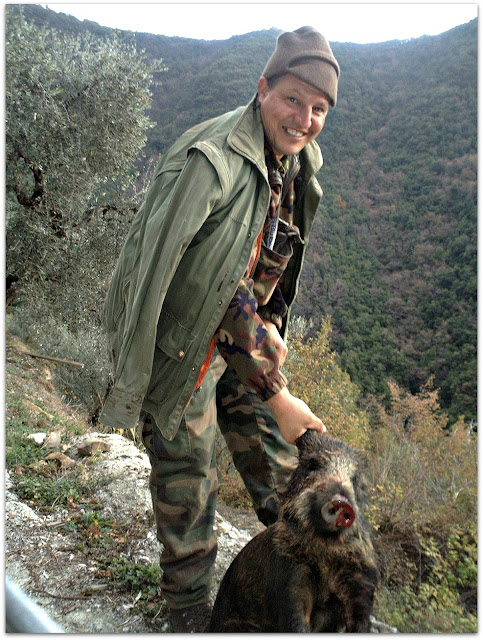 Fast forward from Spring in Tuscany to Fall in Imperia, where we were hiking with friends in the rolling hills east and inland from Monaco.

After our hike to the top of the mountain, we made our way back to the village and  halfway down, we came across a hunter standing by the side of the road with a huge, dead, wild boar.  He'd just shot it in the forest and dragged it to the roadside where he was waiting for friends to arrive to help him haul the beast back to the village in the valley below.

When I pulled out my camera and asked to take a photo, he smiled and proudly lifted the boar's head so that they could both be in the picture.

When we got back in the village, it was evidently a good day for hunting wild boar. 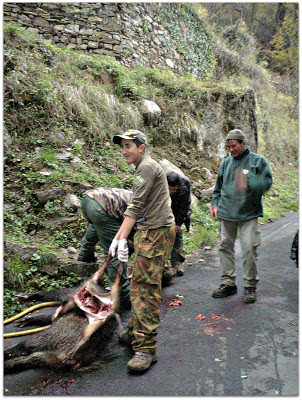 A group of hunters had arrived before us and had started to gut the wild boar while the villagers and a few dogs had gathered to watch the gory action.

While we watched, I got the feeling that much like the abattoir in Cotto, hunting wild boar and gutting them in the village was a tradition that had been taking place for centuries.  I imagine the meat was destined for the dinner table that night and what was left was headed for grateful friends and the freezer.

Both of these encounters were by chance and both times I struggled with what I was seeing as anyone would, I think, carnivore or not.

But in both cases it was a simple, timeless, communal process and ultimately, traceable.

I don't know about you but I'm quite OK with that. 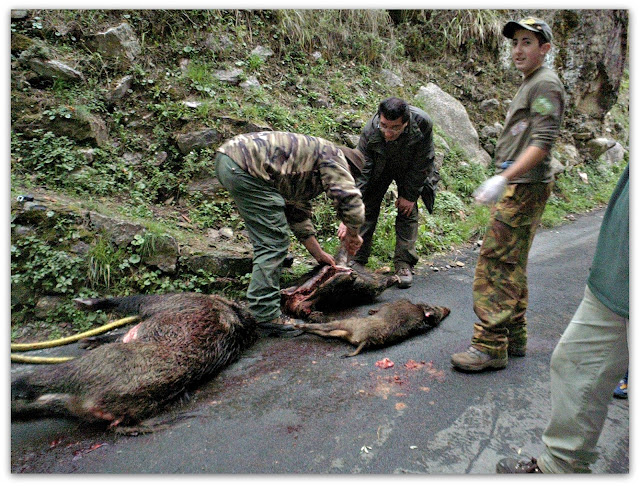 Video of the hunters discussing their hunt (in Italian)

Email ThisBlogThis!Share to TwitterShare to FacebookShare to Pinterest
Labels: Italy

My house here in the Limousin is right in the middle of a hunting area. Occasionally I've seen them dragging a deer into the back of a car. Each weekend when the sound of the Chasse is near I never feel happy, especially when the day before we've had a young deer feeding in our field. Thank you for sharing your tale from your stay in Tuscany.

First off, I'm delighted to meet you, I think via Heather in Arles. So pleased you stopped by to comment chez moi.

Secondly, I suppose the difference in feelings over horse meat versus cows, or any number of other animals, is the fact that some have relationships (for lack of a better term) with their horses, whereas they don't raise, care for, and love their cows.

I'm not a horsewoman, I don't think I've eaten horse meat in France, but then again, I've gone back and forth for more than 30 years, so who knows.

I am a meat eater; I don't feel well without the iron and B12, and I enjoy meat (and poultry and fish), though I eat and cook with tons of veggies, which I love.

Like many, I absolutely hate to see animals killed or butchered, and the thought of the slaughter houses (not to mention Big Food, particularly in the US) - all very disturbing. Worse than disturbing.

When I do eat meat, I have some small assurances that it is more humanely raised and without hormones, due to where I purchase it - not as good as when living in France and truly knowing the origin of the local butcher shop's meats.

Very interesting subject. As is our food supply in general, and Big Food in particular. Worrisome. More than worrisome.

I spent my childhood with an aversion to any meat that wasn't prepared by my mother. She didn't raise it or butcher it...just cooked it. I didn't trust anyone else. I spent my life up to that point picking things out of my meal. And I was really really skinny so my poor mother always got an earful about her daughter that didnt eat anything when every we were at a function or family dinner etc. It wasn't until I was in chef training, and got stuck a whole month in the butchery. God I thought I'd died and gone to hell. I tried EVERYTHING to get out of that part of the class. Short of phoning in sick everyday. But since i was the oldest in the class of 20 yr olds I sucked it up,. And as it happened I came to appreciate THEANIMAL. I had multiple chickens to take apart, pigs, cows and a sheep. Basically our little group had to prep the meat for the whole school for a month. We used to have contests of who could dismember a chicken the fastest. Who could french a wrack of lamb the fastest and who could remove the skin on a stack of ribs the fastest. Well what else do 20 yr olds do for fun in a butchery? I think I was 38 or so. And was considered the one they had to watch their language around. You know your old when they all stop cussing around you. If you know where it comes from or what it was originally. It just makes a better meal. I think I learned the most from that month than any other....well maybe the bottle of vodka poured into a watermelon was a good day and the deep fried brussel sprouts in batter were also a memorable day. Not to mention the day i spent with a box of eggs learning how to flip them in a fryingpan over a garbage can. It took only three flips. ....Everyone should take a chef's training coarse available at most community colleges. The fear of food and cooking will forever be a memory. Well there was that Log home builder training coarse....and that construction coarse for women coarse....Honestly I don't know how anyone can waste time sitting on EI when there are so many training coarses out there .....Anytime I was gainfully unemployed I couldn't wait for some officious civil servant to SIGN ME UP for something really different.

Good to meet you too! Heather sent me to your blog yesterday to read her post and then I lingered like an unemployed patron at a French café! I just love it. So insightful and timely... About meat, I agree with you. Big Food: very worrisome and unsustainable.

Hmm...Oh, I knew that you would have something really interesting to say about this subject and of course, I wasn't disappointed. Was I shocked the first time that I saw that horse meat was sold at the market in Arles? Well, for a second, until, as I told you, I thought of all of the craaaazy things I had seen people eat in foreign countries.

Remi told me that part of the horse meat scandal is arriving due to the law in Poland restricting horse carts from being on the roads. So the horses are being killed for meat. That made me sad, I admit.

As a meat eater, something shifted in this past year, even before this scandal. Remi and I no longer want to eat industrial meat or poultry. We do still buy our fish at the hypermarché but I imagine that will change too..