Our Olive Trees get a Haircut 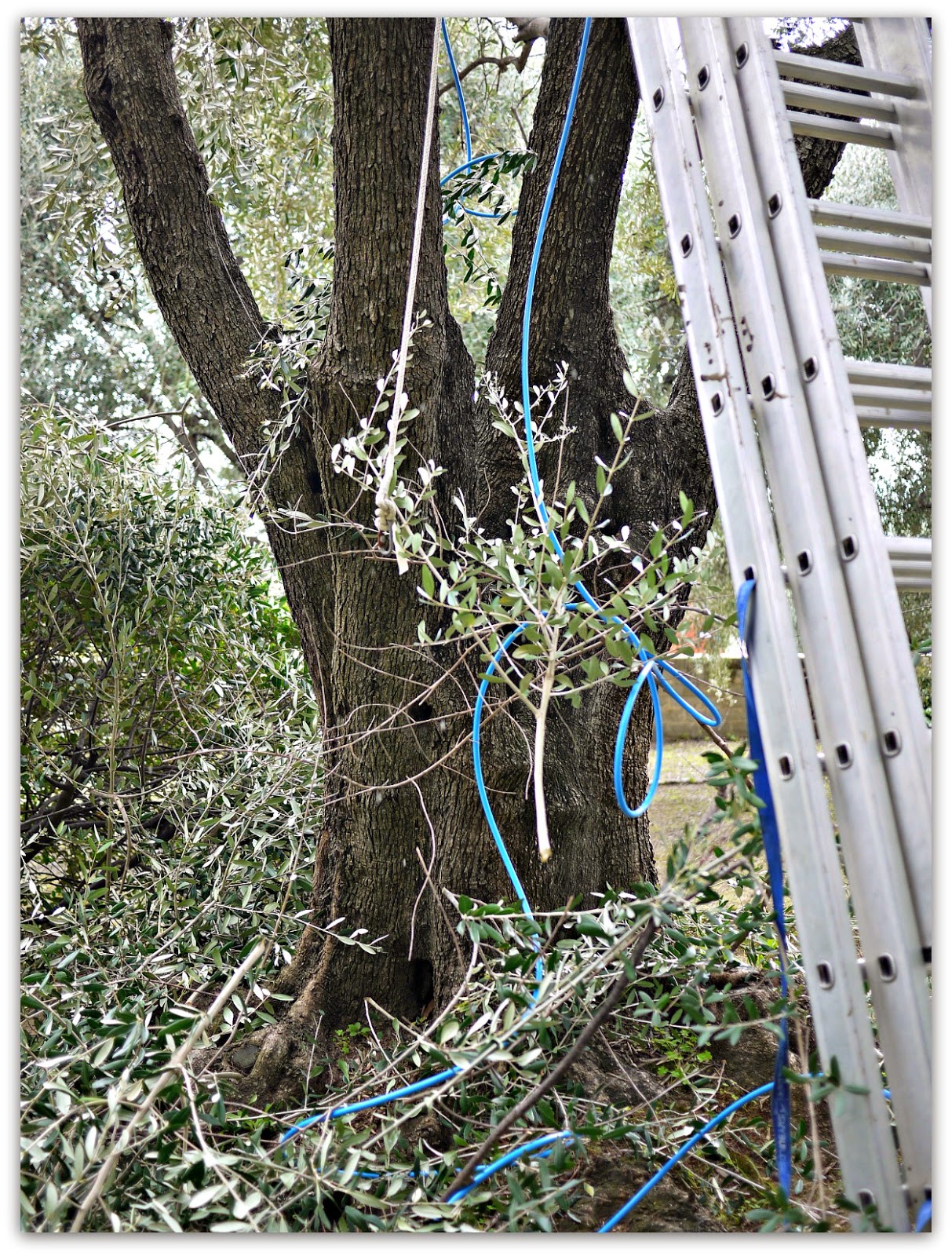 Sometime around mid-March, little buds start to appear on our ancient olive trees.  Not long after that, Darrio arrives to give them their biennial haircut. 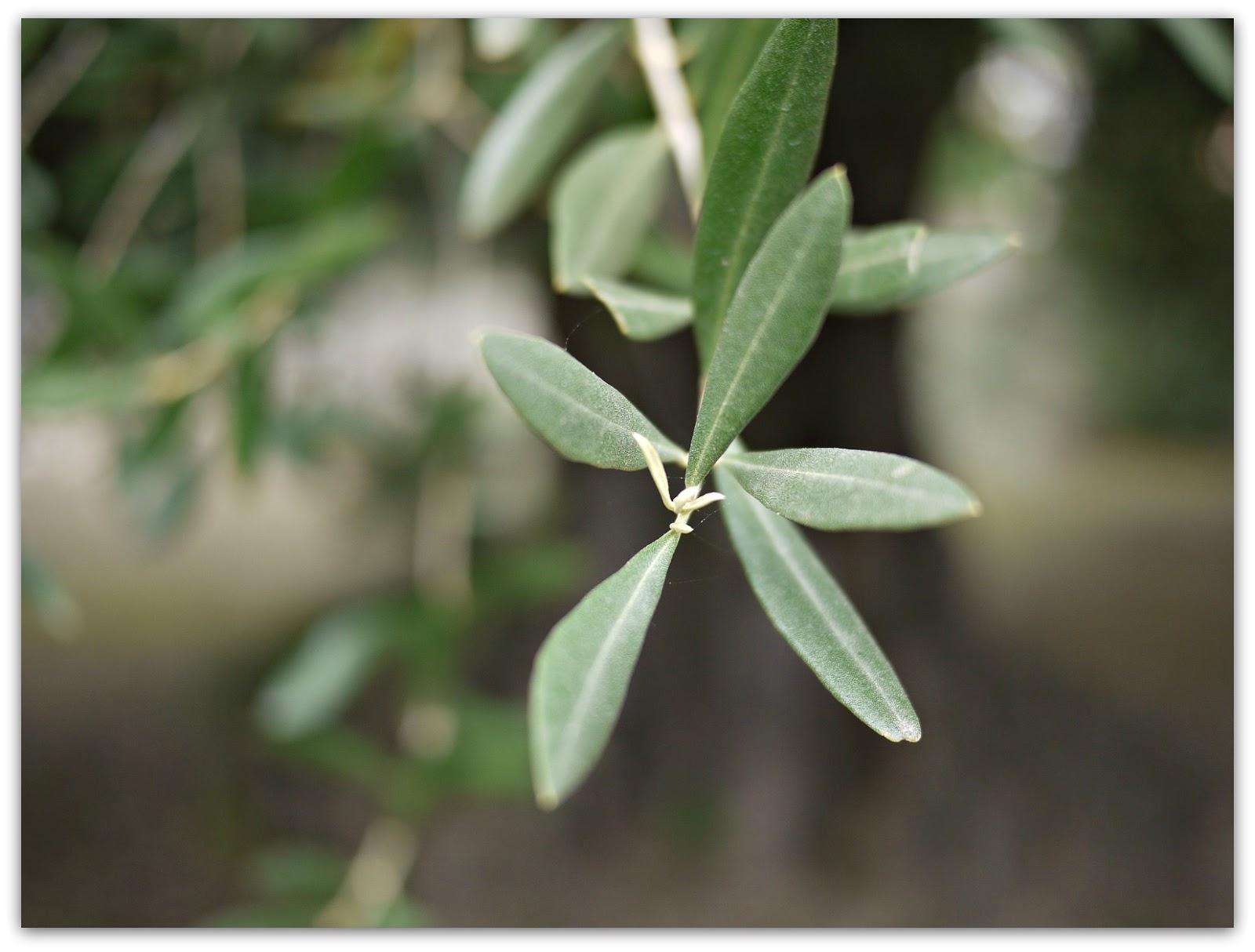 Trimming olive trees is no easy task, best left to the professionals like Darrio.

Our olive trees are very tall, some have been estimated at 800-1,000 years old with trunks as wide as a Smart Car.  Each of them is gnarled with age, like an old arthritic oak tree. They always make me feel so young, like we're just passing through and long after we're gone and forgotten, they'll live on.

Despite their advanced age, by September they each produce masses of little olives and a profuse number of leaves, year after year without any help nor interference from us. 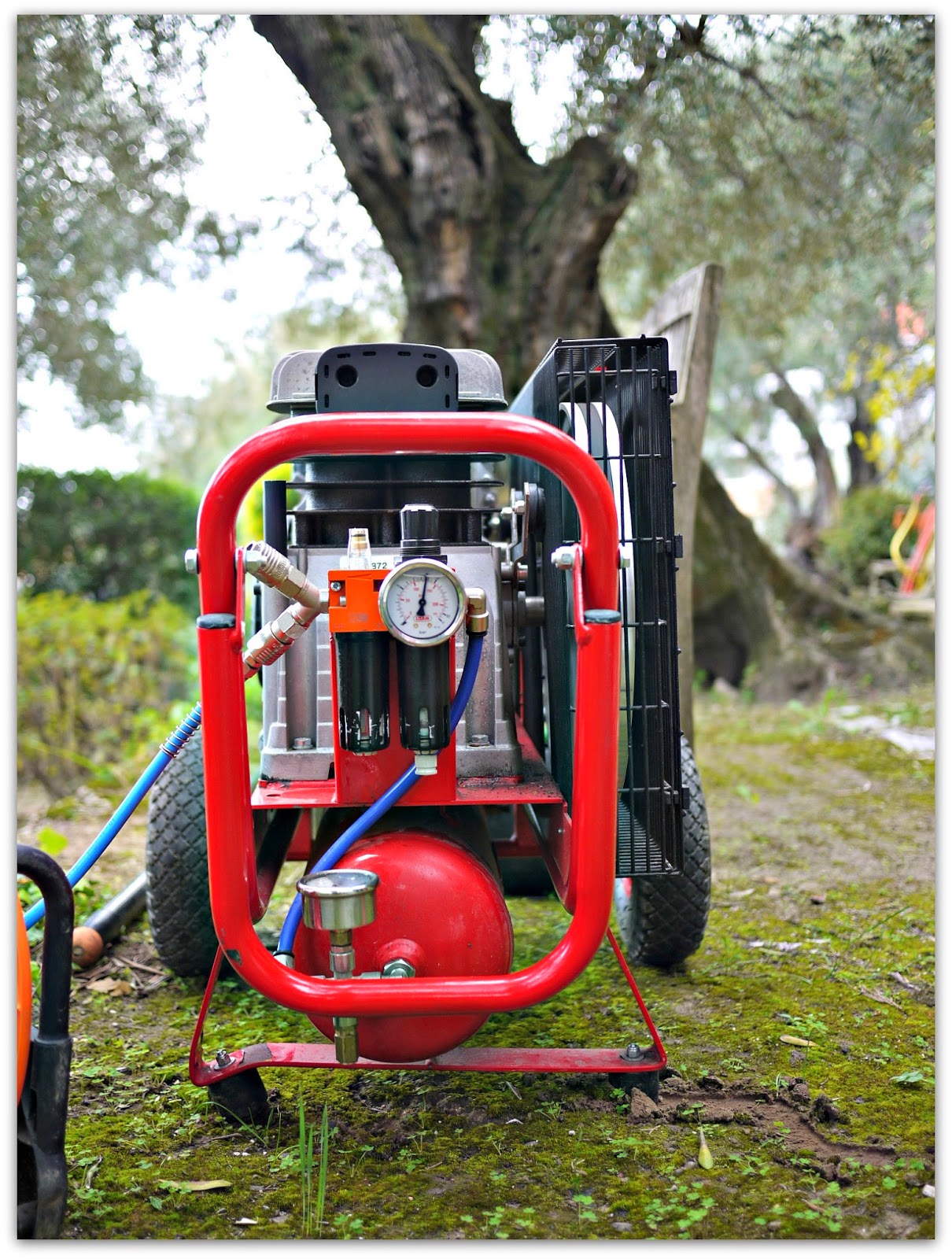 We like to keep our trees trimmed neatly but not as severely as you see in some public parks here where they resemble coiffed poodles more than majestic olive trees.

Our guidance to Darrio is classic:  to trim the trees so that a swallow could fly through the  branches without touching its wings.  So off he goes.

For a week or so, the usual stillness of our garden is broken with the constant sound of Darrio's gas powered olive branch cutter.  From early morning to late evening, his generator growls.  "Chunk" we hear as he cuts through a branch, "Swoosh" as the branches heavy with slate coloured leaves hits the ground.  It takes him almost a day to trim each tree and by the time he's finished, the base of each tree is piled a metre high with branches and leaves.  It's so tempting to jump on the pile and throw everything around like a kid playing in fall leaves but we don't;  the olive branches are hard as steel and the leaves are capable of slicing skin. 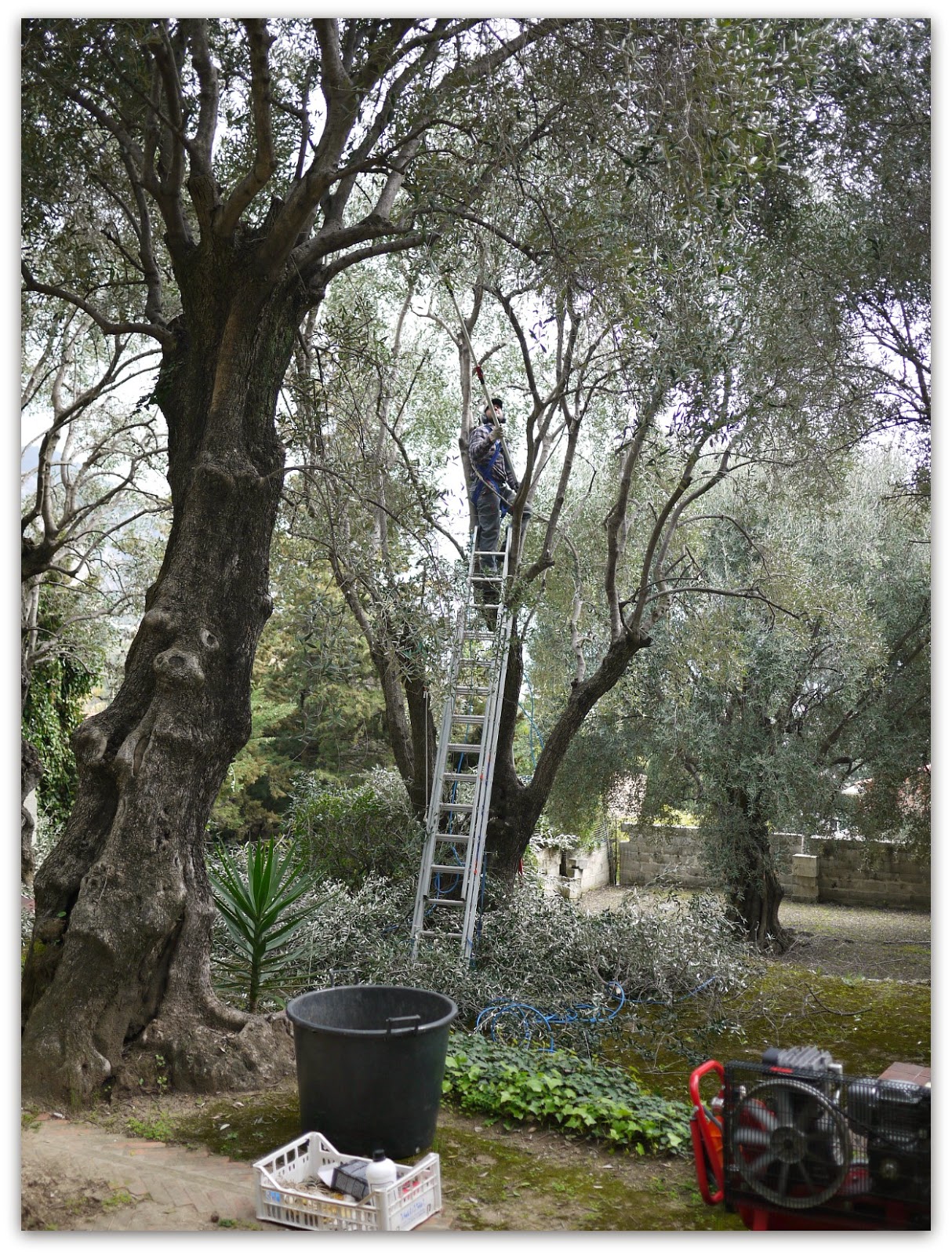 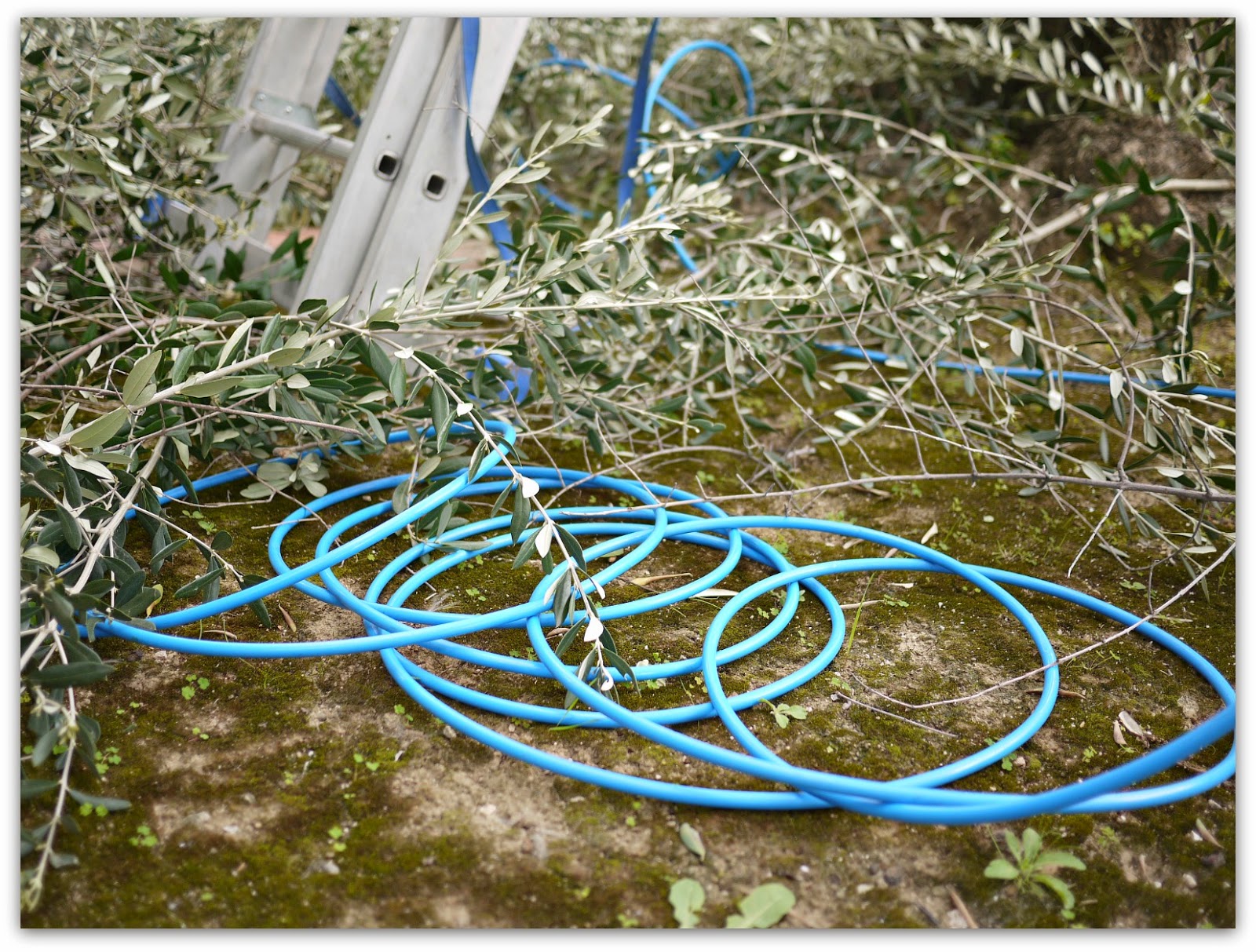 And speaking of olive trees, while I was poking around the garden last week I found a little surprise tucked into one of the trunks.  Seems like all the rain we've had recently revealed that one of our past gardeners was keeping a secret... Based on the shape of the bottle, he was Burgundy fan! 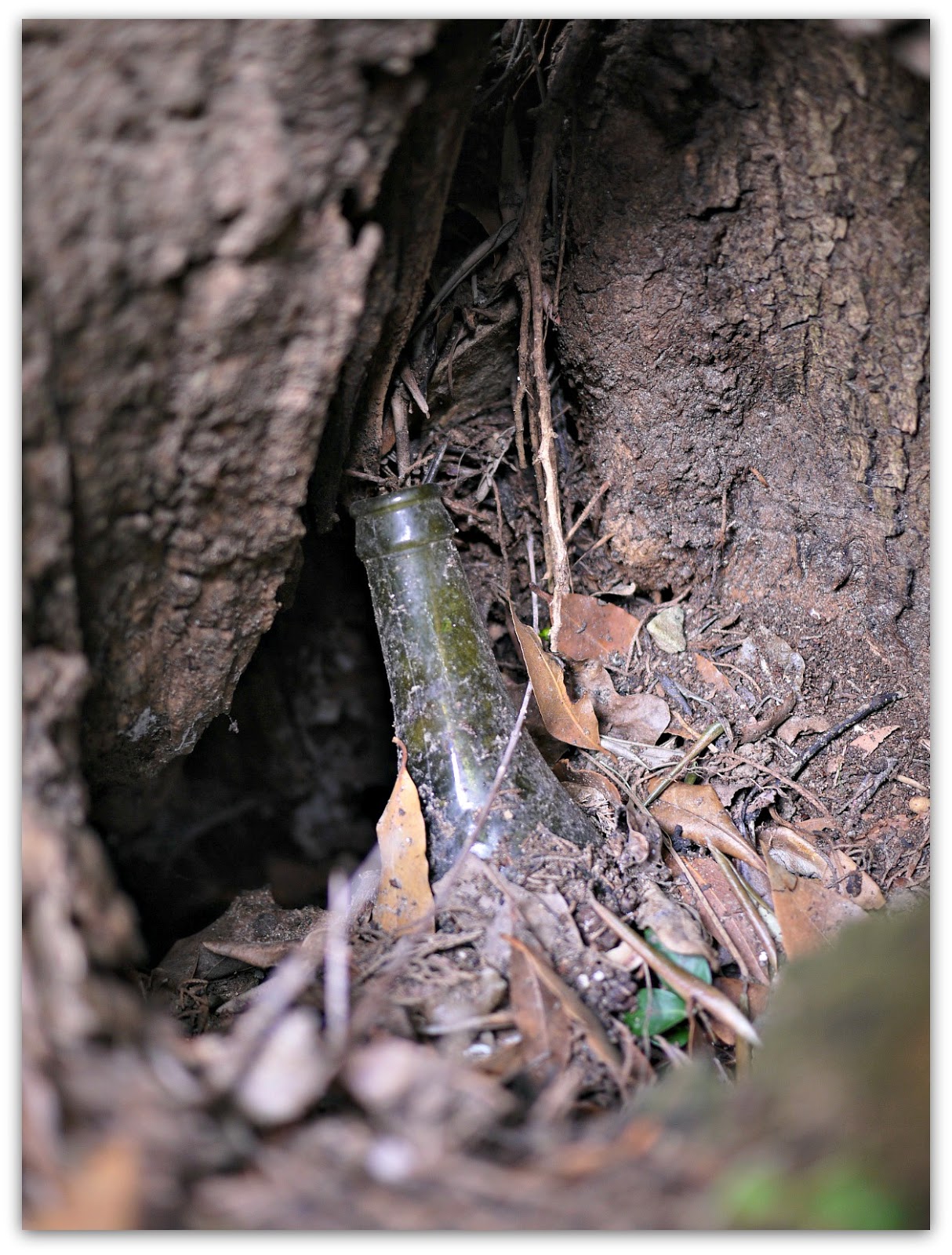 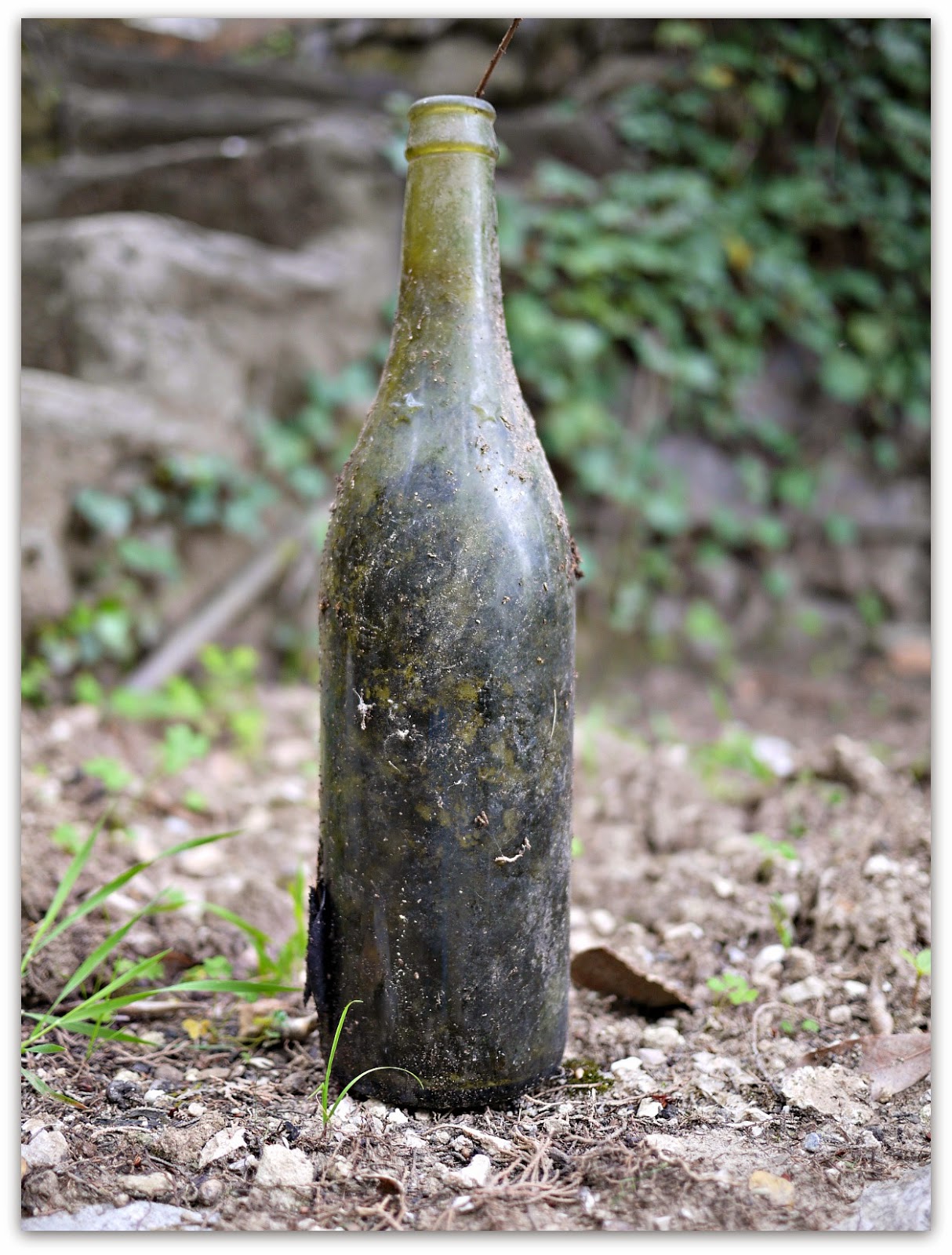 Email ThisBlogThis!Share to TwitterShare to FacebookShare to Pinterest
Labels: France

I have three olive tree and though they've flowered, never an olive. They have to be in pots where I live so I guess there is some reason they don't produce. I didn't even know they grew that large.

Your garden looks magical. We have 14 olive trees which are relative babies compared to yours so I am still able to prune them myself - most satisfying. Warm regards

Being able to trim your own trees must be very rewarding - and less expensive too!

Hmm. Maybe they need to in the ground to produce fruit. When I stand next to ours I feel very small and young.

There's something about olive trees, like they know the secrets of long ago.

Yes! I love your observation and I think it's especially true of the older trees. It's as though they're filled with wisdom and we're just passing through.

I love Loree's comment and it certainly was humbling to walk amidst your wise old trees. Thank you for this beautifully written post...

Thank you Miss! To think that something as old as those trees can still produce delicious olives is a miracle. Humbling indeed.

I could have never imagined all of the labor that goes into caring for a grand old olive tree like this, but what a treasure to tend! It would all be worthwhile once those first blossoms turn into fruits.

Like people, they need a bit of extra care as they age!

So true we have 8 olive trees back in Rome and they hide so many secrets, though young, they keep lots of memories hidden. Actually I planted one myself, almost 40 years ago! JB I miss you!

Hey Tony! So good to hear from you. Miss you too!