I arrived in Canada on a Monday for my annual summer visit so for the entire week I was chomping at the bit, waiting for Sunday morning so I could zip over to the Lansdowne Farmer's Market and load up on delicious Canadian spring things to eat.

I love my first visit of the season.  It's fun to get caught up with old friends and vendors, see what's new and dream of dinners to come.


Well, what was new this spring was Mark and Kendra Snyder's Flatbread Pizza Company and their handsome portable wood-fired pizza oven.  Inspired by the pizza he enjoyed while travelling through Northern Italy,  Mark is now making fabulous pizzas in Ottawa.  Lucky us!  But that's not all...
Their oven reminded me immediately of traditional Socca vendors in the South of France, their wood-fired clay ovens attracting a stream of people eagerly awaiting a paper plate filled with it, hot, delicious and salty.  By far the best Socca comes from those who make and serve it in the traditional way:  out in the open air, baked in an olive wood fuelled oven, cut into little squares, powdered with pepper and shared.  My mouth waters just thinking about it.
Socca is a traditional street food on the Cote d'Azur.  You can sometimes find the same dish across the border in Italy although there it's called Farinata.  It is believed to have been brought to the South of France in the nineteenth century by the Genoese.  In both countries it's made from the same four simple ingredients:  chick pea flour, water, salt and olive oil and it's always cooked in shallow, copper coated pans that have been liberally coated with olive oil before pouring in the runny batter.


You can sometimes find Socca in French boulangeries (bakeries) but it's never as good as the real thing.  Socca is meant to be consumed standing around in the open air, straight from the oven.  The flavour that the ultra high heat and a wood fire imparts to it is what makes it so delicious.
The last time I had traditional Socca in France was this March at the Fête de l'Olive (Olive Festival) in the charming hilltop village of Castellar, a 20 minute drive from our house in Menton and it was delicious.    Socca vendors appear quite often in towns and villages around the region, and usually set up shop for the day as in the case of Castellar's festival or for the duration of a longer event like the months-long annual winter Foire (Fair) in Port Hercule in Monaco where they sell generous portions of Socca for a mere €3.  Quite a contrast against a backdrop of multi-million dollar super yachts. 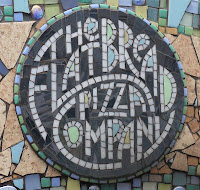 So, three weeks ago when I saw Mark's pizza oven we talked about Socca and this Sunday morning when I spotted him stirring a bowl of thin yellow batter my heart jumped.  Could that be Socca batter?  Yes, it was!  Mark is now offering it as a base for his new Gluten Free Pizza.  What a brilliant idea!
Licking my chops, I ran home, dug out my copper coated traditional Socca pan and bolted back to the market.  Mark graciously made me some Socca in my own pan and it was absolutely delicious.  I ate most of it on the spot, in the fresh morning air and happily shared some of it with curious passers-by who mistakenly thought that the little squares were free samples.

Luckily I managed to rescue a few squares to take home to my husband who agreed with me that Mark’s Socca was as good as the best Socca we’ve had in France.
You can find Mark, Kendra, their helpers and his wood-fired oven pizzas and Socca at the Main Farmer's Market every 2nd Saturday starting on June 11 and every Sunday at the Lansdowne Farmer's Market.
My advice?  Go early – they sell out every week.

reminds me of our visit to Nice and eating socca at the market....yummy.

It does make an excellent base for a pizza-like topping.

What did the free-sample people think of it?