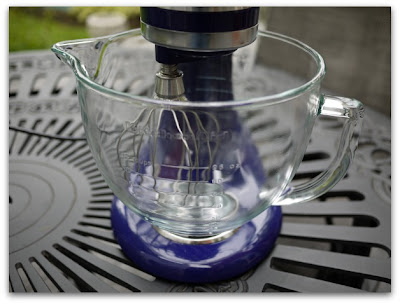 When I get back to my old neighbourhood in Ottawa, I can't resist popping in to one of my favourite kitchen shops to see what's new, wander around, and get a bit of inspiration for dinners and baking to come.
Well, what's new was Kitchen Aid's glass mixing bowl!  I bought one the minute I saw it.  How can it be that I didn't I know about it before now?  I guess I've been spending too much time travelling because after a visit to Kitchen Aid's website I learned that it's been available since March 2010.  Imagine, an entire year without this glass mixing bowl. 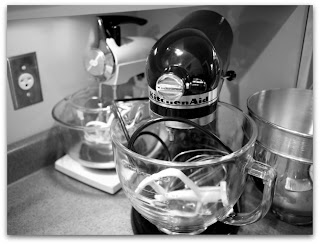 To quote Julia Child, "I think this mixing machine is absolutely marvelous."    She was talking about her new K5A Kitchen Aid stand mixer and I agree!

I bought my first Kitchen Aid in 1990 and It's been reliably whirring away, taking on anything I throw at it.  It's my favourite workhorse in the kitchen and I use it for everything.  Over the years I've bought most of the attachments and do-dads, the last one being the ice cream maker. 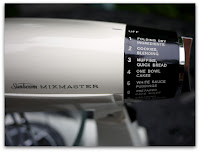 I love making my own pasta so the pasta roller is the the first one I bought and it's still the one I use most.  Don't  tell anyone but in a pinch I've used the linguine cutter to shred documents and it did this extraordinarily well! 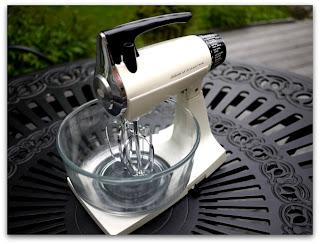 Many moons ago,  for mere pocket change, I bought my perfect Sunbeam mixer at a garage sale and it sits on my kitchen counter next to my Kitchen Aid.   It's not as robust as the Kitchen Aid but it's totally reliable, quite beautiful and it's handy when a smaller mixing bowl is the best tool for the job.  I also find the sound it makes while it's mixing oddly comforting.  Most importantly, with two beaters to lick instead of the Kitchen Aid's one, it's quite popular when I bring it to my baking class at the local Seniors' Residence.
In New York a while back, I happened upon an interesting exhibit by the still life artist, John Morra who immortalizes and elevates the modest mix master in his beautiful still life paintings.   I was mesmerized.
One day, if I save enough I think I'll have him paint mine.
Posted by Gustia at Wednesday, June 01, 2011

This is Hilary - the girl who interviewed and took pictures of you at the Great Glebe Garage Sale last weekend. I can't remember if you gave me your email address or not, but I just wanted to share with you the post I wrote for the blog Local Tourist Ottawa. It's basically a wrap up post of my experience at the sale, and you and your bake table are mentioned. Thanks again for chatting with me!

Also, I'd love to get your email address again - you can reach me at hilary.dot.duff@gmail.com

Have a nice day!