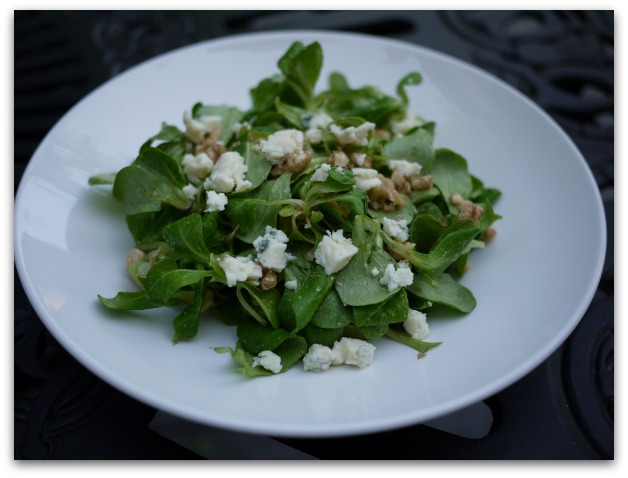 Now that July has arrived and the sky is about to catch on fire, it's time to put away the pots and pans and pull out the salad spinner!
When I visited the Main Street Market today  I spotted something that I rarely see in Ottawa but I see every day in France, a tender, tiny, slow growing green called mâche.  In France you can buy pre-washed bags of mâche for a few euro, even from the most modest of supermarkets.  I bought some Canadian grown mâche (for a lot more than a few euro I might add) and whipped up one of my favourite salads, Mâche with Roquefort and Walnuts.
The first time I had this salad (without the pear) was in France 11 years ago and I've been making it at home ever since.  As a child one of my favourite snacks was blue cheese spread in the grooves of celery stalks so this salad my grown up version of one of my childhood comfort foods.
Mâche is quite versatile.  It has tender leaves but it's also sturdy so it supports heavier accompaniments that would normally collapse other greens.  Also you can eat the entire plant, roots and all.  Now that's ecological!
Authentic French Roquefort like Société Roquefort is made with ewe's milk, has an official French A.O.C. designation, and it's traditionally matured in caves in the region surrounding the village of Roquefort in South Central France.  Its creamy texture and intense flavour is a good choice for this salad but its admirable provenance aside, I prefer the the flavour and creaminess of the less urbane Saint Agur.  Why not try both and decide for yourself?

Any fresh French or Californian walnut will do but take this advice:  buy them at a bulk food store so you can take a big sniff to make sure they are fresh before you buy them. I've been disappointed too many times buying stale walnuts in sealed bags from evil doers who sell them... 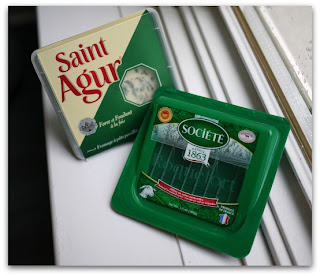 If you prefer you can double the recipe for Caramelized Pears depending on your tastes and that of your guests. The pears look nice arranged on the side of each person's plate and their sweetness pairs well with the pungent cheese.


Serve the salad with a bottle of rosé, some Perrier, a good baguette, and poof, you're in France!

Mix the sugar, lemon juice and salt in a medium bowl. Set aside.
Cut the pear in half and use a melon baller or small spoon to remove the core and the blossom.  Leave the stem if the pear has one. 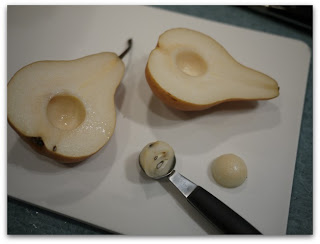 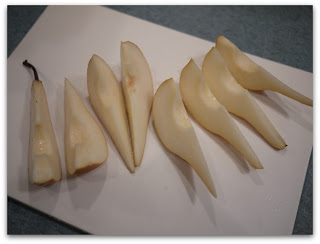 Cut each half into four pieces.

Place the pear slices into the bowl with the lemon juice and sugar mixture and use your hands or a spatula to toss gently to evenly coat the pear pieces. 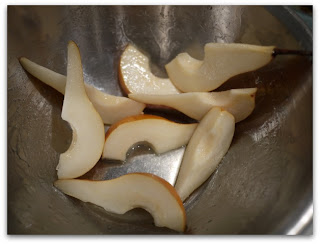 Melt the butter on low heat in the non-stick pan.  Arrange the slices in the pan and turn the heat to medium-low.  Using tongs or a spoon and fork, turn the pear slices periodically so they caramelise evenly.  Meanwhile,

3.  Prepare the Greens.
Wash the greens in cold water, spin until dry, place in a large bowl, cover and refrigerate until ready to assemble the salad. 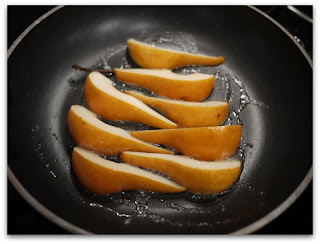 Put the vinegar, salt and pepper into a bowl and whisk in the Dijon.  slowly pour in the oil, whisking all the time to make a thick emulsion.  Set aside.


5.  Prepare the Walnuts
Using your fingers or a knife, cut the walnuts into medium sized pieces. Set aside. 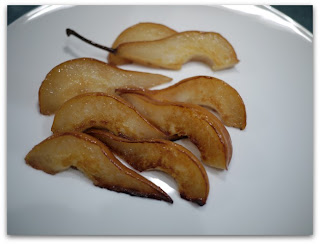 6.  Assembly
Toss the greens with the dressing and arrange them in mounds on 4 individual plates. Sprinkle each of the mounds with some of the walnuts and small pieces of the cheese.

The photographs and detailed instructions are great. Thanks!