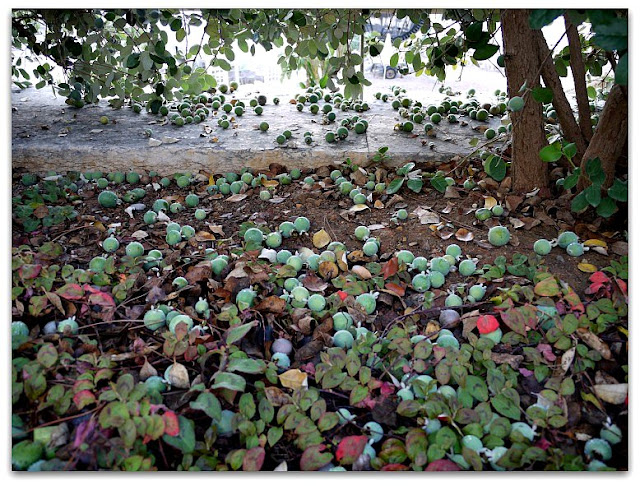 Of all the things Monaco is known for, I'll bet you never thought that foraged food would be one of them. You'd be surprised how many things you can find in and around Monaco that are edible and delicious. And free!
One morning on my daily power walk from our nest in Monaco-Ville to Larvotto Beach, I stopped to stretch out the old hamstrings and something nearby caught my nose that was sweet and enchanting like the smell of candy necklaces mixed with limes.  It was obvious where the aroma was coming from.  Under the nearby bushes where I had perched my foot, the ground was covered with hundreds of little sage coloured fruits about the size and shape of little eggs.  They were Feijoa, a fruit not very well known here but very well known in Brazil where they are native and in New Zealand where they are common and used in baking and to make preserves.
Lucky for me, many of the fruit had ripened and fallen under the bushes within easy reach, safely scattered on a soft ground cover.  Instinctively, my long forgotten childhood foraging training kicked in.
My grandmother was an avid forager and as I child she'd recruit me and my sisters for her little foraging outings.  Together we'd collect rose hips from local parks, fiddle heads from forests in the springtime and little wild strawberries which were my favourite.  I really didn't see the point nor appreciate her quirky enthusiasm at the time. Like most children I preferred to get all my food from the fridge or the cupboards.
Granny was a big fan of Euell Gibbons, one of America's iconic food foragers and author of Stalking the Wild Asparagus and other wild food guides.  Mr Gibbons started foraging as a teenager to keep him and his family from starving.  He may have been the butt of many jokes in the 1960's and '70's but look who's laughing now...
According to the The Huffington Post, food foraging is just the next step in the "eat local" craze even though it was simply a matter of survival for humans since the beginning of time.  What with the world wide food scene being saturated and seemingly there's nothing new to eat, food foraging is building momentum and becoming fashionable.
Take for example Chef René Redzepi and his ground breaking Copenhagen restaurant, Noma where his menu includes ingredients that have been foraged from Denmark and neighbouring Nordic countries.  He was recently awarded the San Pellegrino "Best of the World's 50 Best Restaurants" Award.  He must be doing something right.  Or interesting.  Or both.  His dazzling cookbook, Noma includes recipes for dishes like Sea Buckthorn and Beetroot Flødeboller, Bulrushes, Thuja Cones, and Ramsons Leaves. What could be more alluring than that? 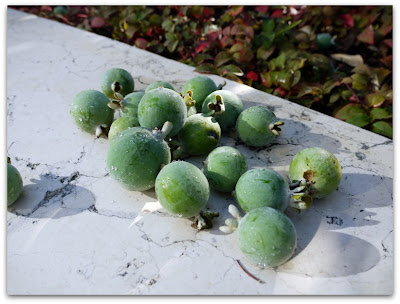 I've been known to grab the occasional sprig of rosemary or lavender as I walk by a bush or to return from a mountain hike with some wild thyme stuffed in my pockets but finding those Feijoa kicked it up a notch. 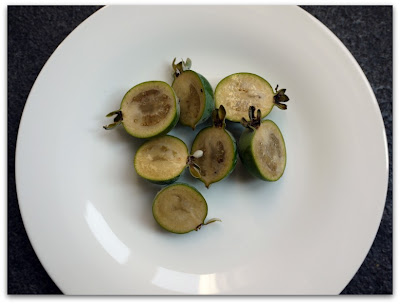 Because Feijoa are so fragile they are not usually shipped which explains why they aren't found in supermarkets  like Carrefour.  In fact, fragility and rarity are two of the top characteristics of foraged food.  I've seen Feijoa occasionally being sold by the local producers in the markets in Ventimiglia or Menton but only rarely and in small quantities.
When I got the Feijoa home I ran to my laptop, did some surfing to learn more about them and tentatively sliced a few open to taste them for the first time.  Their skin was hard and slightly bumpy and the minute I cut them open I knew what to do with them.  They tasted as delicious as they smelt, fruity and sweet and reminded me a bit of guava.

Over the course of 3 days of power walks, I filled my nap sack with them until the fourth day when they disappeared altogether, presumably gathered up by the gardeners and tossed out, fastidious bunch that that are.  Or maybe another forager took them.
Luckily I had gathered about 2 kg, enough to create a new recipe:  Fairy Cakes with Feijoa Glaze and Lime Sugar.  My Brazilian friend snagged the rest of my foraged bounty to make jam after she smelled them in my kitchen and politely asked to have them.
I noticed last week that the gardeners planted some kumquat trees near the Oceanographic Museum. I wonder if they'd mind.....

Thanks. I have a couple of these trees in my yard but I never tried them.
My neighbor keeps picking them (I rent and shooed her away because one's right by my window. I'll have to apologize and work some times out with her!) so she doesn't scare me half to death. Now I have some ideas about how to eat them.
Thank you!

You're welcome! Let me know what you make!