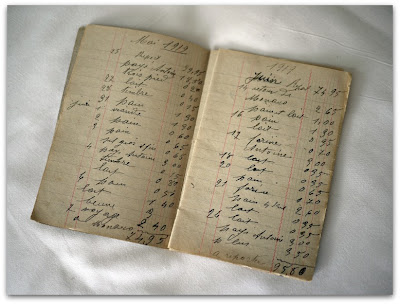 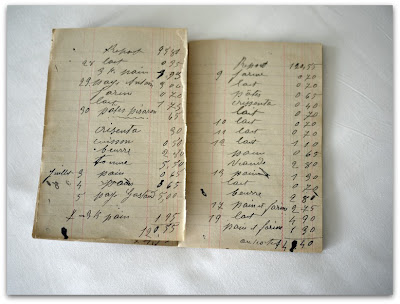 On June 28th, 1919, the same day that the Treaty of Versailles was being signed to end the First World War, Madame Catherine Alasia was writing in her Ledger Book of Deliveries and Purchases, "lait" and "3 livre du pain."  Total, 2.30 French Francs.

Her purchase of milk and 3 pounds of bread  was a modest and prosaic task considering the gravity of what was taking place in Versailles to the north of her.

I found Mme Alasia's little 3"x5" account book at a local flea market and for the past few months, I've been picking it up, leafing through it, putting it down, and wondering what it all meant as I was seduced into the past whenever I opened it.  I paid a mere €2 for it, a complete steal considering its age and how it's stirred my imagination.

One sunny afternoon, my French friend and I sat in my kitchen and pored over it, page by page, she with an innate understanding of French culture and me as a curious time traveller.  We were both eager to decipher what I considered to be a romantic food find.  Together we pieced together the closest we could come to the truth without having been there.

Mme Alasia's entries began in 1917 and ended in 1920.  Most likely, she was a cook for a Catholic residential school or an orphanage in Beausoleil or somewhere between Menton, France and Monaco.

In her 30 page ledger book, she recorded her purchases and deliveries, and frequent travelling expenses of 3.60FF to Beausoleil near Monaco and to other nearby villages.  We assume that she had many children to feed based on her almost daily purchases of vast quantities of milk.  I imagine that many children were orphaned in the war and perhaps these children fell under her guardianship.

Why Catholic?  Mme Alasia mentions "Mother Superior" and "the sisters" in one of her entries and my French friend noted that every year around Easter, Mme Alasia bought lamb which is traditionally eaten by Catholics at Easter. 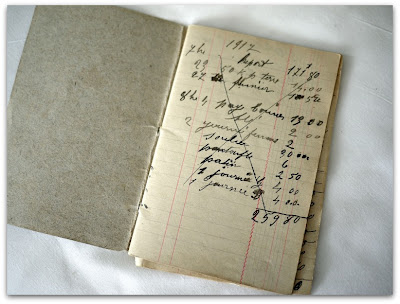 Milk, bread, flour, and butter were her most frequent purchases.  Entries for vegetables, fruit, and meat were rare but one entry for soulier (shoes), pantoufle (slippers) and patin was intriguing.

Patin were felt booties that you would slip on over your shoes or directly on your feet, and then polish your wood floors by sliding around in them.  I'm not sure who would have worn the patin at the time, perhaps Mme Alasia or an energetic child but the idea of someone slipping on patin and sliding around to polish floors is utterly charming to me.

I'm glad I found this little book and that I could share it with you.
I think it's a remarkable and intriguing little time capsule of what must have been a difficult and austere time to be living in France. 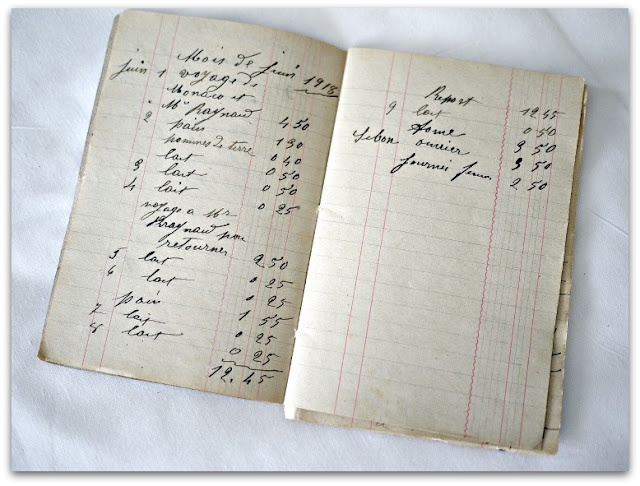 Oh I am so glad that I didn't miss this entirely! How amazing. I love things like this where you can puzzle out the workings of another time. Somehow I could almost picture her by the end of your post!