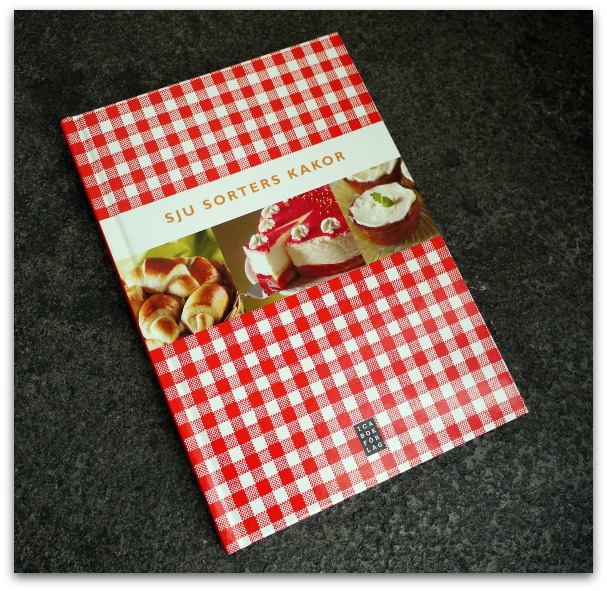 During a "let's catch up" drink this Friday, my Swedish friend surprised me with a lovely gift from a recent trip to her native Sweden:  a classic Swedish baking book entitled, Sju Sorters Kakor by Ica Bokförlag.

After a bit of research and setting up a short cut key for an umlaut, the whole sweet picture came into focus.

Sju Sorters Kakor was first published in 1945 as the result of a baking contest held after the end of World War II and since then 3,657,000 copies have been printed.    In 2008 it was translated into English and was renamed, "Swedish Cakes and Cookies."  My Swedish friend translated it as, "Seven Kinds of Cookies" even though there are far more than that in the book.
The minute she gave it to me I flipped through it and became inspired.  I know nothing about Swedish baking so here was something new to explore and play with.  There were so many interesting recipes that I'd like to try but the first one I chose is Rulltårtsbakelese Med Bär or Jelly Roll Slices with Berries and Cream.  It's a pretty cake that could be served at a formal tea or as a luncheon or dinner dessert.

I translated and interpreted the recipe from Swedish, added some vanilla and salt to the sponge and some details to the method for clarity but the essence and final product remain the same.  I was stymied by one word however, Vispgrädde.  My Swedish friend says its a thick cream with a fat content of 40%.  Yowza!  I wish I could find Vispgrädde here in France!

The biggest difference I found between Swedish and English recipes was that Swedish measurements are in decilitres (dl) which is a liquid measure.  One dl = 100 ml.  If you have a liquid measuring cup you should use it.  I've left the "dl" measurements in the recipe so you can measure in Swedish too.

When was the last time you made something from Sweden?  Give it a try - it's delicious! 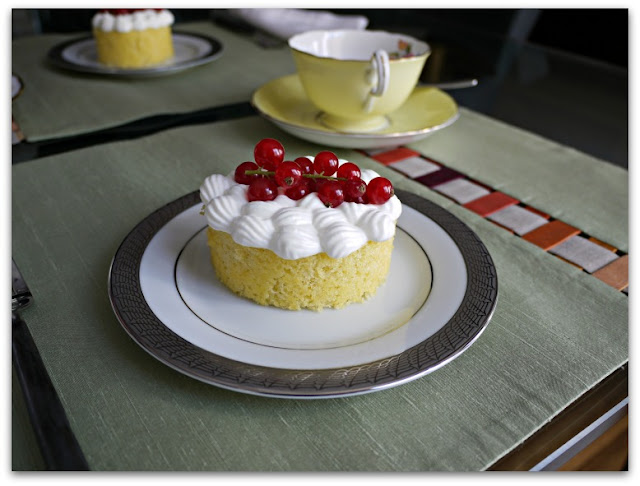 Line the jelly roll pan with one piece of parchment paper and cut one more piece a few inches longer than the pan and set this one aside for later.
Mix together the flour, baking powder and salt.
In a separate bowl, mix the vanilla into the milk.

2.  Prepare the sponge
Beat the eggs and sugar together on high speed until the mixture triples in volume and reaches the ribbon stage.  Gently mix in the milk until fully incorporated into the finished egg mixture.

Pour the batter into the parchment lined pan and using an offset spatula, gently spread the batter to evenly coat the pan.

Place the pan in the oven and immediately turn the temperature down to 200ºC/390ºF.   Bake for 5 minutes until light brown all over and it springs back when lightly touched.  Allow the sponge to cool in the pan.  This will help it from cracking when you roll it.

3.  Assembly
Lift the cooled sponge from the pan and flip it over onto the extra piece of parchment.  Gently pull the parchment from the baked sponge.  Slice about 1/2 cm or 1/4" from each short end.

Spoon the jam onto the sponge and spread it evenly everywhere using the offset spatula.

Position the sponge with the long side closest to you.   Grasp the parchment paper at the edges (see photo) and use the paper to push the sponge away from you into a tight roll.
Wrap the roll in plastic wrap and refrigerate seam side down for about one hour. This will make the roll easier to slice.  Reserve the parchment paper.

4.  Final Assembly
Whip the cream and icing sugar together to stiff peaks.  Fill your pastry bag.

Sprinkle the parchment paper with the 2 tablespoons of sugar. remove the jelly roll from the plastic wrap and roll it in the sugar to coat evenly.

Using a serrated knife, slice the roll into 1" (2cms) slices.  You should have 10 slices.  Put each slice on its own plate or arrange them all on a large plate if you wish.

Pipe the cream on each slice as you wish, top with berries and dust with some icing sugar (if using) to finish. 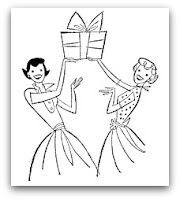 What a sweet cookbook find! I love those cute and yet still helpful illustrations. Your roll cake really does look perfect, so tightly spun and immaculate.

I have the same book but I still have lots of recipes to cook!